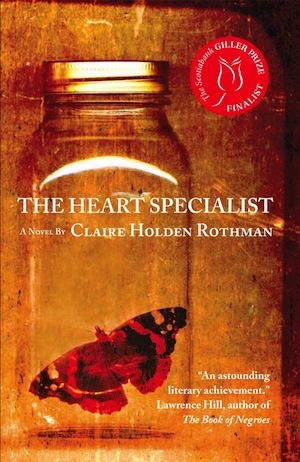 As a young girl living in rural Québec in the late nineteenth century, Agnes White is drawn to the “wrong” things. Growing up, she finds herself fascinated with microscopes and anatomical dissection – unladylike hobbies to which her doctor father had introduced her early in life, before scandal pushed him to abandon his family and home. Agnes is drawn to medicine like a moth to flame. Despite the criticism of almost everyone around her and the many obstacles preventing women of the time from assuming traditional male roles, she persists in wanting to become a doctor, even if it means taking on the medical establishment at McGill University. She eventually becomes curator of the McGill pathology museum and discovers there a heart specimen that not only launches her career as an internationally acclaimed expert in cardiac anomalies, but provides the first of a series of clues leading to her missing father.

Inspired by the career of Dr. Maude Abbott, The Heart Specialist is a testament to the power of perseverance and of dreams.

Longlisted for the 2009 Scotiabank Giller Prize

Selected Book of the Month at Cote St. Luc library in Montreal (September 2009)

“Told with precision, grace, and passion, The Heart Specialist is a beautiful, moving, utterly captivating novel about a woman who becomes one of Montreal’s first female doctors. The writing is striking, the emotion immediate, the medical detail fascinating and the story compelling from the first page to the last. Claire Holden Rothman deserves a wide audience for this astounding literary achievement.”
– Lawrence Hill, author of The Book of Negroes

“The Heart Specialist is an electrocardiogram of a novel. Claire Holden Rothman sensitively traces the peaks and valleys experienced by a woman breaking though the formidable gender barriers of early twentieth-century medicine. Her Dr. Agnes White is a fascinating character, an anomaly in her time, an authority on the human heart who knows so little of the workings of her own. I ached for her.”
– Caroline Adderson, author of Pleased to Meet You

“I can pay a book no higher compliment than to say I didn’t want it to end. With The Heart Specialist, I rationed my reading, permitting myself only a few chapters at a sitting so as to savour the writing and the story.”
– Susan Schwartz, Montreal Gazette

“The Heart Specialist offers something for nearly everyone. Students of Canadian history, particularly Canadian medical history, will enjoy the work’s careful and lifelike detail. Montrealers will delight in the atmosphere of turn-of-the-century Montreal, which is a palpable presence throughout the book. Yet others will be drawn to the depiction of a pioneering woman’s struggle. Mystery lovers will revel in the slowly unveiled secrets, and romantics will discover at least a little of the stuff of dreams. Some will find the best thing of all: a book we look forward to turning the pages of, remembering where we last left off.”
– Aparna Sanyal, Montreal Review of Books

“The Heart Specialist is a fascinating novel that conveys both a sense of history and of the timelessness of human emotions. That Rothman also demonstrates the damage that prejudice can do, and the power of the human spirit in overcoming it, is simply an added bonus.”
– Candace Fertile, Quill & Quire

“The novel is ably researched and written, with never an ungraceful sentence.”
– Emma Donoghue, The Globe and Mail

“There are some lovely scenes, especially afternoon tea in the museum, where an embroidered cloth is spread over the dissection table, and a guest arrives with a box of pastries in one hand and a freshly excised heart in a pail in the other.”
– Alice Petersen, Rover Arts