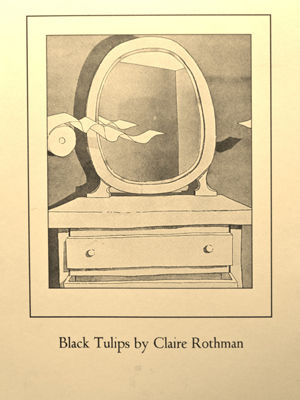 The stories in Black Tulips hinge on seemingly small but actually significant moments in daily life, moments lit up by awareness. All are shaped by the presence of the City of Montreal, which reflects those moments of contact when people manage to touch each other despite their hurry and confusion.

“This is the real Montreal, seen with insight and gentle drama, without cliché or agitation.”
– Lise Bissonnette, novelist, former editor-in-chief of Le Devoir and former head of Montreal’s Grande Bibliothèque

“The Black Tulip is a wonderful, confident story of a mother’s first meeting with her son and his gay lover. The mother is arch and in full swing and suffers no fools, nor is she fooled herself …The Acupuncturist is much more than a number of intimate moments between a cancer patient and her doctor. It is a delicately rendered and graceful look at life, hopeful and joyous under its outer layer of fear and uncertainty.”
– Terry Jordan, the Montreal Gazette