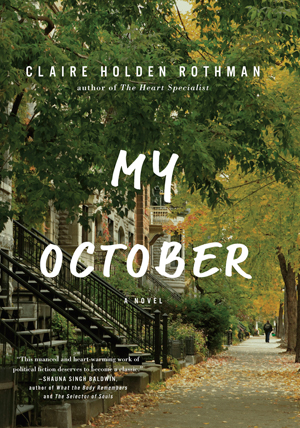 October 1970. FLQ terrorists kidnap a British diplomat in Montreal and hold him hostage for fifty-nine days. More than thirty years later, the story continues to reverberate.

Luc Lévesque is a celebrated Quebec writer and the anointed Voice of a Generation. In his home town of Montreal, he is revered as much for his novels about the working-class neighbourhood of Saint-Henri as for his separatist views. But this is 2001. The dreams of a new nation are dying and Luc himself is increasingly dissatisfied with his life.

Hannah is Luc’s wife. She is also the daughter of a man who served as a special prosecutor during the October Crisis. For years, Hannah has worked faithfully as Luc’s English translator. She has also spent her adult life distancing herself from her English-speaking family. But at what cost?

Hugo is their troubled fourteen-year-old son. Living in the shadow of a larger-than-life father, Hugo is struggling with his own identity. In confusion and anger, he commits a reckless act that puts everyone around him on a collision course with the past.

Weaving together three unique voices, My October is a masterful tale of a modern family torn apart by the power of language and the weight of history. Spare and insightful, Claire Holden Rothman’s new novel explores the fascinating and sometimes shocking consequences of words left unsaid.

“Rothman (The Heart Specialist) expertly weaves the intimate story of this family with the political history of Quebec. This novel about power, language and acceptance should resonate with those who have felt torn between languages and cultures, as well as those who have felt like outsiders in their own city or country.”
– Publishers Weekly

“We’ve all heard the old Chekhov directive that if a gun appears at a certain point, it has to go off by a certain point. What Holden Rothman does with that is just one of the many ways she subverts expectations in a book whose dramatic ironies and emotional depths deepen with practically every page.”
– Ian McGillis, The Montreal Gazette

“The novel novel is beautifully written by someone who understands families torn asunder. Hanna is a translator who can’t communicate and Luc a writer who can’t understand the past. Only [their teenage son] Hugo knows he is lost and struggles to find the truth. He is so much more than Hugo Lévesque—his is really the story of Quebec where influences go beyond one nationality or culture.”
– Linda Diebel, Toronto Star

“Deftly rendering the inner voice of each of her protagonists – Hugo, Hannah, and Luc – [Rothman] presents a nuanced network of perspectives, challenging the divisive dichotomy that generally characterizes Quebec politics.”
– Kimberly Bourgeois, Montreal Review of Books

“Rothman is perhaps reminding us that, as myth constantly, stealthily encroaches upon reality in our minds, true liberation requires seeing things as they are.”
– Kimberly Bourgeois, Ottawa Citizen

“My October is a very absorbing read, mainly because Hugo is so inscrutable and seems like he could do something dangerous at any time. He also represents what we fear most as parents – that we will raise a child who scorns our basic values.”
– Kimberly Bourgeois, Now Magazine

“Let’s just get this out of the way: this is one of the most politically audacious novels I have ever read. Claire Holden Rothman crawls under rugs most of us in this province have left untouched, and the dust she stirs up is impressive…The thrill of reading My October is akin to finding an old lover’s diary that you really shouldn’t read, but – of course! – you do.”
– Leila Marshy, RoverArts

From teenage turbulence and middle age angst to aging parents, it’s big, multi-generational family drama – set against the backdrop of a conflict of cultures and the long shadow of a violent historic event.”
– Cynthia Ross Kravit, everythingzoomer.com

“In diamond prose that never intrudes on this mesmerizing tale of a family attempting to separate, Rothman reveals the dilemmas of Quebec. For her finely-drawn Montrealers, the personal and political are inseparable, relationships inseparable, and two languages insufficient for modern times. Writing with clear-eyed honesty and authority, reframing histories that invoke nationalism and ethnic identity, My October asks that we question stories we think we know. This nuanced and heartwarming work of political fiction deserves to become a classic.”
-Shauna Singh Baldwin, author of What the Body Remembers and The Selector of Souls

“An important Canadian story, courageously told and filled with the echoes of centuries of history.”
– Suzanne Desrochers, bestselling author of Bride of New France